True to its tagline, Simply great invoicing, Hiveage's online invoicing software makes it easy for freelancers and small business owners to automate their invoicing and run their business like a pro. Read more From estimates to online payments to auto-billing Hiveage makes it easy to move your invoicing to the cloud so you spend less time on your paperwork and more time on your business. Join over 65 thousand users worldwide loving invoicing with Hiveage. Read less

Hiveage is designed for freelancers and small businesses for fast, simple invoicing and billing. 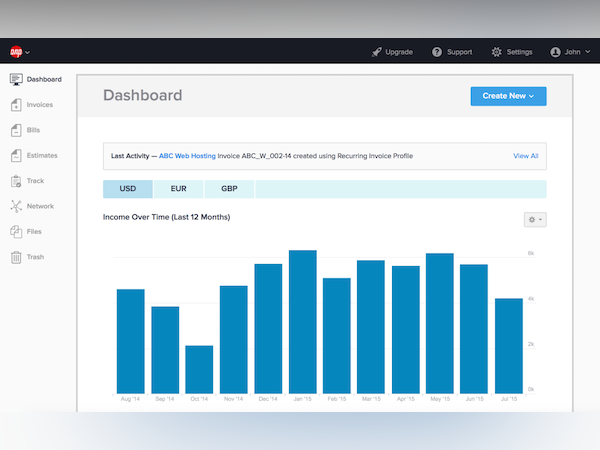 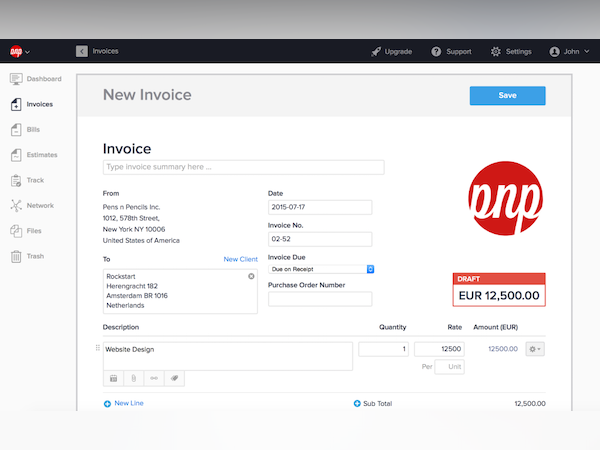 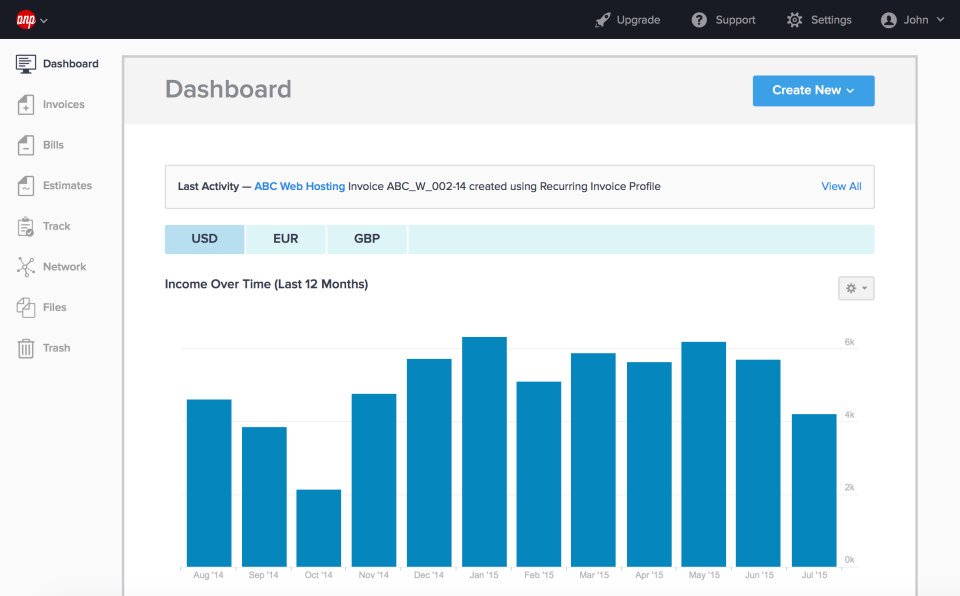 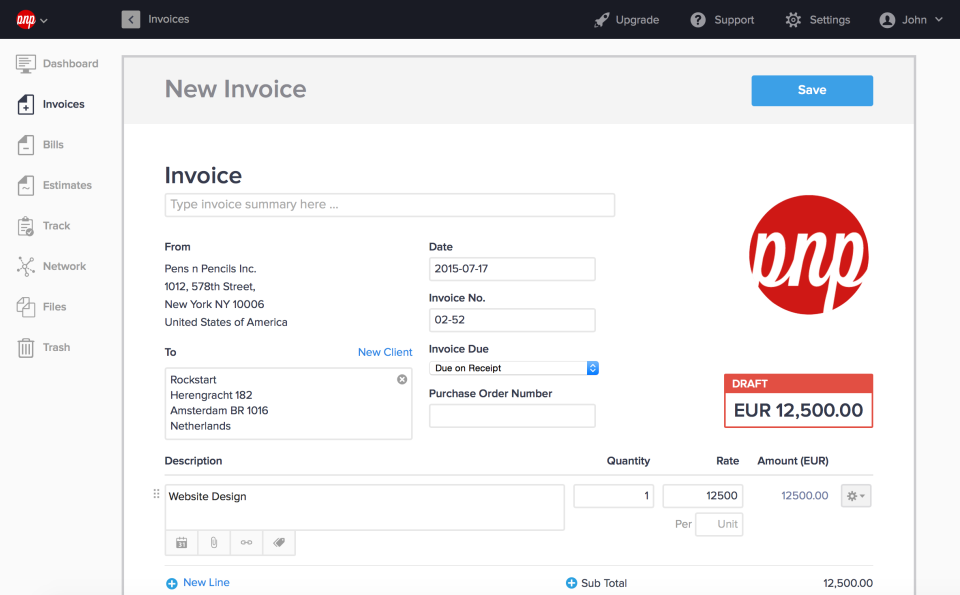 Not sure about Hiveage? Compare with a popular alternative

4.6 (390)
Collaborate on projects, track time, manage expenses and invoice your customers. Available in the cloud, from any device!
View Profile See Comparison

5.0 (1)
Axonaut is the all-in-one CRM tool that delivers the unbeatable combination of power, efficiency and simplicity.
View Profile See Comparison

4.6 (20)
Furious is a complete and intuitive solution to manage and control your teams, your service company or your start-up.
View Profile See Comparison

5.0 (4)
A cloud ERP solution that is affordable & easy to use. We focus on field service, distribution, and professional services.
View Profile See Comparison

5.0 (1)
Digitize and automate your processes with our tailor-made ERP software especially for retailers and service providers.
View Profile See Comparison

5.0 (1)
incwo is an ERP software that provides everything a business needs to run efficiently, such as CRM, Sales, Manufacturing, inventory ...
View Profile See Comparison

4.3 (5,728)
QuickBooks Online is a small business accounting software and app that allows you to manage your business anywhere, anytime.
View Profile See Comparison

4.7 (14)
OneBill is your complete revenue management solution. It covers all aspects of your business from lead to cash. Start billing !
View Profile See Comparison

Comments: If you're in the market for a simple and streamlined invoicing tool for your small business, Hiveage is the best and most thorough program out there!! We use this not only for billing, but keeping a handle on our businesses checks and balances. We get everything we need in one convenient place and for one low monthly rate. Customer service is always fast and friendly and our customers like the professional look and clear breakdown of what they are purchasing. From all of us at Senchant's Art of Teaching, Thank You Hiveage!!

Default payment button attached to invoices is sometimes confusing for our clients. We do not have this feature setup and would just prefer the button not be there.

Manager in US
Ranching, 11-50 Employees
Used the Software for: 2+ years
Reviewer Source

Does everything we need

Comments: We were wasting a lot of time with our previous system. Hiveage has helped us recoup a lot of wasted time and energy.

Expense for our needs. At this time there are many features that we aren't taking advantage of but we're paying for. In the future I foresee us using many more of the features but for now it's mainly a reference resource for our deliveries and customers. If there were a more basic plan that enabled us to utilize more basic features and pay a smaller monthly fee that would be helpful.

Where is the customer support team?!

Comments: I had high hopes and want to continue using their service and vouch for their service but with the lack of customer service response on issues that affect our usage I can't recommend anyone using this if they rely on this service for their day-to-day operation. Should be as glitch-free as possible and even if there are glitches any customer service help we need should be responded back within a few days max whenever possible. I'm currently waiting at 7 weeks and counting with no reply back and that's unacceptable!

One thing I like about the software is that it has multi-currency invoicing which we need and an app where we can issue quotations and invoices on-the-go. Overall it should suffice for most businesses out there.

The lack of customer service response and also sometimes the platform is glitchy (e.g. you have a product preset and it doesn't pull up when you try add to an invoice, and if you add a new customer during the invoicing stage it doesn't add that new customer details to that invoice after you've entered all the necessary customer details and save those details). These are sporadic issues and becomes an annoyance after a while. They also pitched a custom domain option (which is one of the reasons we've signed up for this) and it worked initially and now doesn't work at all and says the feature is a beta feature (which was never mentioned on their website). When we have an issue with this and contacted customer service we get no response back and when they do they don't reply back. Live chat = non-existent. Email = no reply back.

Regarding the custom domain feature mentioned in this review: Hiveage continues to support custom domains, and the experimental feature that was discontinued was SSL support on custom domains (which was not promoted publicly). We were one of the few, if not the only, invoicing software to try this feature, but at the moment we do not have an ETA for re-introducing it. As a policy we refrain from publicly commenting on matters specific to individual customers.

Creative Director in US
Design, Self Employed
Used the Software for: 2+ years
Reviewer Source

I was on board after my first invoice

Comments: Hiveage has made my life so much easier. I can just set it and forget it with most of my recurring billing clients. It's definitely worth the $100 a year to me - just in time savings alone. It's so simple to set up for 1 or 100 clients on one-off or recurring billing. Step 1. Add your client's email and details
Step 2. Add your own Paypal (or whatever you want) account info
Step 3. Make your itemized invoice - set it to recur every X months.
Step 4. Hit send
Step 5. Wait for your money System automatically sends invoices, reminders and payment receipts and marks them as paid once the funds come in. I only use Paypal but clients don't need to have Paypal to make payments. You can even track when a client has viewed the invoice. It had perfectly scaled with the growth of my business, and I see loads of room for future expansion if I ever need it. Customer support has always been helpful and ultra fast.

Simple to use and saves me so much time. Very inexpensive. No transaction fees, just my annual fee based on the services I use.

Some functions take a few clicks to get to which could maybe be simplified & an alternate default view for showing which invoices are outstanding would be helpful.

Comments: I've tried many invoicing apps to support my consulting business accounting, and Hiveage is by far the most useful. When most of your attention is focused on running your business, apps that are either too complex are just as much of a problem as those which don't do everything you need them to. Hiveage strikes the balance I need perfectly, allowing me to breeze through invoicing with minimal effort.

User interface, ease of use, clarity, and reporting.

Could use multilingual invoice templates